Our upstairs hall bath is definitely on the list for a facelift.  The basic footprint is fine, although it sure would be nice if the door did not swing open and into the side of the toilet.  Also, because of this odd set up the previous owners put a hole through the back of the door after forcing it beyond the doorstop.  Oh well, add that to the list of “fix-ups” around here.  Anyway, lately I have been opening the little skinny window in this space because it lets in so much light, benefitting the stairwell and hallway areas.  It’s nice to look up and see a bright light showering down.  But, this is still a bathroom and we are not exhibitionists here.  Well, maybe the toddler is, but that’s another post altogether.  In order to enjoy the sunny window, but keep some privacy I decided to add a café curtain and valance.  As with the laundry room makeover, you will see me employ this technique for privacy and sun blocking whenever necessary, because unlike frosting a window it still allows a view out should you want or need to see something.  I like the idea of frosted glass, but having done so to a bathroom window in the past, I now know how nice it is to actually be able to see out if needed.

Since this room is far from finished, still in the planning stages and not at all in the budget yet, I decided to stick with something simple and inexpensive.  I tried, without any luck, to dig up a piece from my fabric stash, but nothing seemed quite right.

Here is a list of what I am working with:

White trim (very dingy, though, so it appears cream colored)

Full wall mirror behind the vanity

Builder’s blind on the small window

If money were no object I would probably gut it and start over, but that’s NOT how I roll!  I have lots of ideas for how to change things up on the cheap and I will be happy to share those plans in the future over at Kitsch Designs, when I finally get around to tackling this project.  So, for now let’s concentrate on one little aspect at a time.  The window dressing project!

Here is the sunny window that needs some help.

Since I know I will be working with a white and blue palate I had been searching for some fabric with that color scheme.  It could not be too girlie, though, because this bath is mainly used by my son and the occasional guest.  After several attempts to find the perfect pattern at the big box fabric stores I stumbled upon these kitchen towels at Target.

I know they are a total clash with the super cool bicycles, but eventually they will fit right in.  I just love the bold, but modern floral pattern and the deep blue, almost black-navy colors.  They are very Marimekko, am I right?  The pattern runs along just one side of the towel, so I used the tension rod to hold them in place while I played around with how to hang them.  I liked the idea of the white being in the middle to let in the most light, but since I would need two towels to cover the window that would result in a seam right down the middle.  Not really wanting to see that every day,  I tried to make a pleat to hide the seam and add some interest.  It was okay, but I thought that even the pleats were hiding too much light. 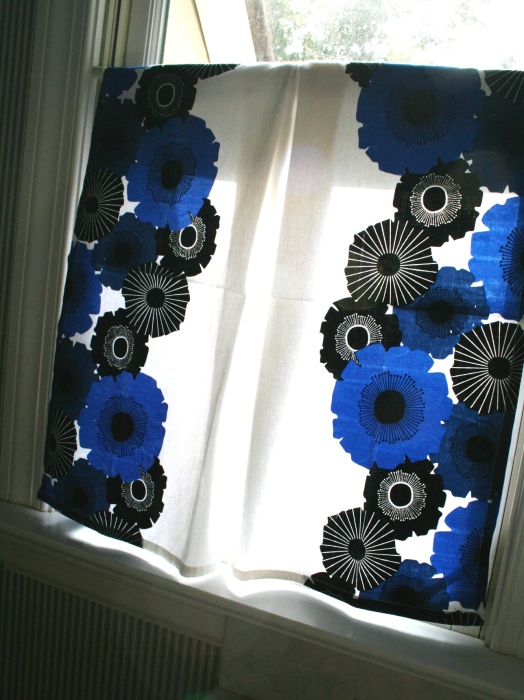 That’s when I decided to cut them! 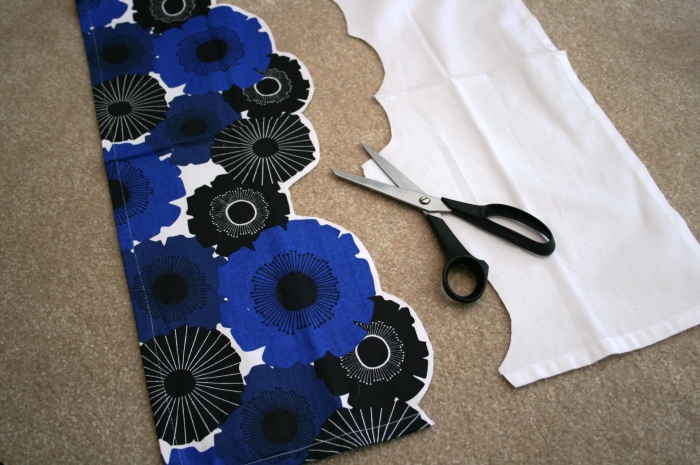 Yep, I sliced the floral border right off the side of one towel.

Then I opened up the seams from a second towel, pressed it flat and laid the floral border of the cut towel down along the white side of the second towel.  I bridged the gap between the borders by lining up the cut side as far over as possible, while keeping within the window measurements, for a simple flat panel.

After lining up the cut edge, I pinned it in place.  I then used a satin stitch, in contrasting navy blue, that curves with each flower along both sides, to attach the cut edge and add some interest.

After creating the panel I cut away the extra fabric and hemmed the bottom edge.  Then I flipped the top edge over and stitched a pocket for the tension rod.  To make it nice and neat I gave the whole thing a once over with the iron.

For the valance, I opened the hems on two more towels,  and cut around the design on one of the towels for the middle section.  In order to make the valance long enough to wrap around the edges of the window trim, I used the second towel to add width to each end of the first towel.  I took the time to match up the floral design and then I stitched the pieces into place with a satin style topstitch.  Once I knew the fit was right, I trimmed away the extra white fabric from the side pieces to match the border of the middle section of the valance.  To give the edges strength and to keep the fraying somewhat in check I ran a straight stitch along the white border of the floral design.  I did sew a hem into the side edges just before wrapping the top over and stitching it into place, being sure to leave a small gap to run the valance bar through. 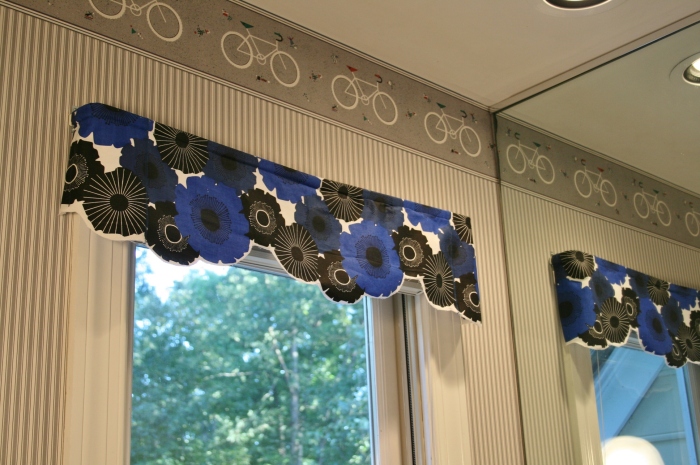 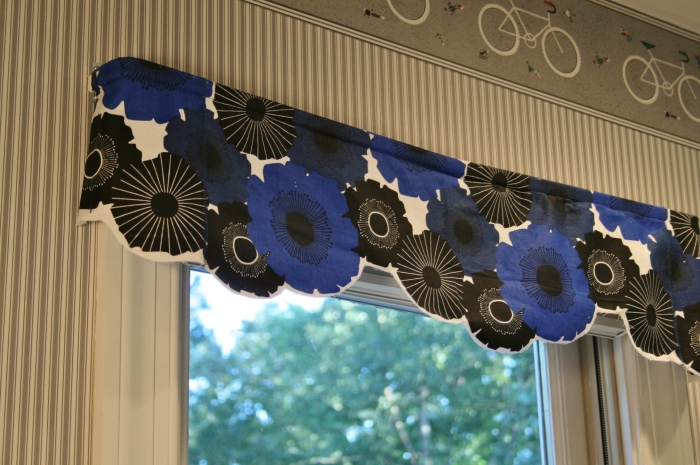 I decided to allow for a slight deconstructed look with this project, using the top stitching on both the curtain and the valance.  Plus, rather than doubling up and encasing the curved edge of the valance for a crisp finished look, I opted to reenforce the cut edge with a straight stitch instead. 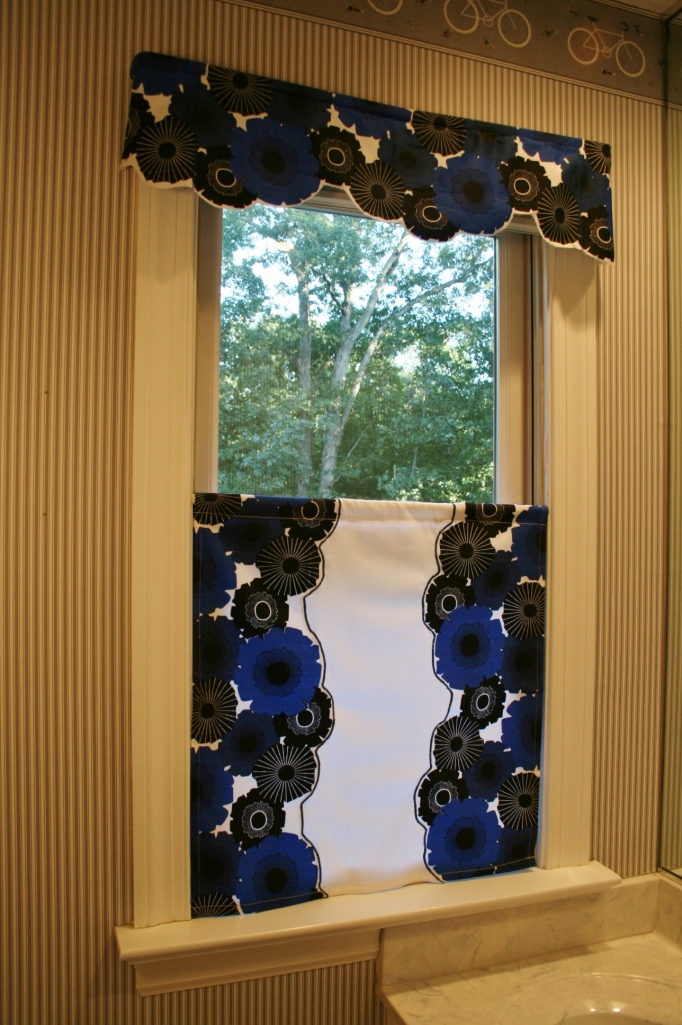 I think the finished product looks simple, but nice and modern.  I can already imagine a new wall color, deep blue glass pendant lights, blue glass accent tiles in the tub surround, navy blue towels…..etc., etc., etc..  The list of changes goes on and on!

Tell me, have you ever used an item in a totally different way than it was intended?

Promote Your Page Too